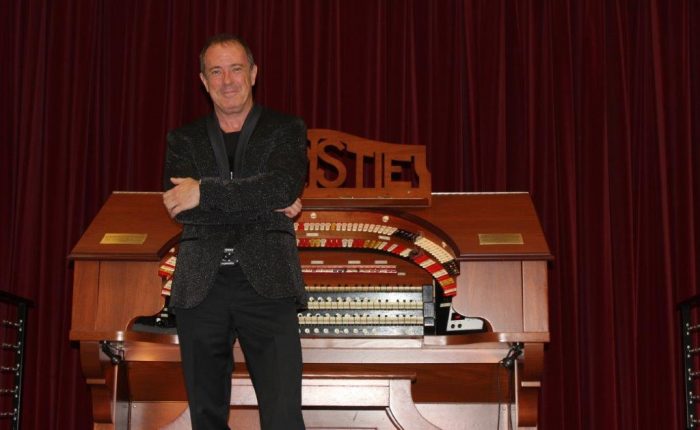 Rob flew in from Melbourne the previous Wednesday, so he was able to spend quite a bit of time familiarizing himself with the Christie and setting up the huge number of registration changes he employed during his performance. He really extracted just about every stop combination from the Christie—and in a very sophisticated and tasteful way. Minimal use of what seems to be now mandatory digital backing music was utilised. Rob Richards also paid tribute to two organists who have influenced him over the years—George Wright and Lyn Larsen.

His opening number, Hooray for Hollywood, has become his signature tune and set the scene for his program. As this year marks the 80th Anniversary of the Disney animated film Snow White, Rob Richards then presented a medley of those very familiar tunes from this classic movie. Rob is a great fan of George Wright (and is custodian organist on one theatre organ George made famous—the ex-San Francisco Fox Wurlitzer, now installed in the Disney El Capitan Theatre in Hollywood). His next piece was dedicated to Wright and used his arrangement of it, Ain’t We Got Fun. It sounded very authentic on the Christie with the whimsical, even mischievous registration sounds used.

Back to the Hollywood show pot-pourri, with the Sherman brothers’ theme from That Darned Cat. Richards then moved to a bluesy, relaxing version of Michel LeGrande’s What are You Doing the Rest of Your Life. Use of a slow piano pedal beat, vibraphone and untremmed stops provided a smokey, cabaret-like atmosphere for this number.

His first half was rounded off with an imposing rendition of Raiders of the Lost Ark theme, then You Ain’t Never Had a Friend Like Me, ending with an intergalactic trip through space with music from Star Trek, ET and Darth Vader. 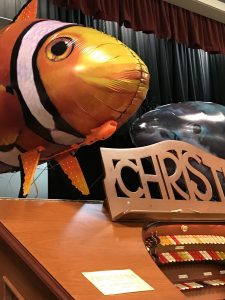 Returning for the second half, Rob Richards brought the console up with the famous Mickey Mouse theme, then Broadway Rhythm in true theatre organ style. His next piece involved two additional ‘fish trainers’ back stage who launched large helium-filled fish out from the stage. This was happening as Under the Sea was played by Rob, from the Disney animated film blockbuster of the same name. Thanks Kev and Tim for your efforts there!

This was followed by a rousing 76 Trombones from The Music Man and then a beautiful rendition of Serenade from the Student Prince. Orchestral registration and delicate use of the shades made this version a gem. Next came a Mary Poppins medley with Rob giving credit to the former Queenslander who invented the character Mary Poppins.

Musical theatre remained the theme, with two famous pieces from Phantom of the Opera, All I Ask of You and a jazzy Phantom of the Opera (with backing rhythms). As the concert drew to a close, Richards advanced to more modern times with Let It Go from the movie Frozen.

Finally, to close the program, Rob presented possibly the highlight of the afternoon… a section of Handel’s Messiah, featuring the Hallelujah chorus. The Christie’s classical pipe organ sound was magnificent—and as Rob said, “Yes I can play pedals with both feet!” The orchestral backing gave it great depth and what a majestic sound it was. The audience reaction was raucous—encore, encore!

Rob Richards returned to the console with a medley including some home-spun favourites… When You Wish Upon a Star, Waltzing Matilda, I Still Call Australia Home and ending with his signature tune Hooray for Hollywood. Thus ended another wonderful afternoon’s musical entertainment starring the incredible Christie cinema pipe organ ably controlled by American Rob Richards.

It was encouraging to see many children and new faces in the audience. I am sure they enjoyed the fun factor of listening to music that almost everyone would recognize from their childhood through to their adulthood. Thanks goes to Paul Bailey for the wonderful lighting, Di Purchase and Debbie for the afternoon tea, Bill on ‘the bar’, and all who set up the coffee, audio, seating, front of house etc. Also, the Christie never sounded better thanks to Rick and Tim, our ace tuners.