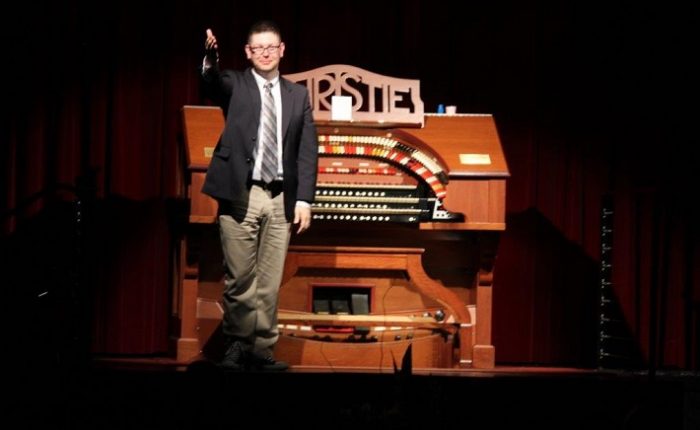 Review: ‘An Afternoon with Justin Stahl’

Justin, together with his lovely wife Lora, flew over from Ohio USA via Sydney and into Brisbane to start his first Australian concert tour. He credits his great-grandfather with introducing him to the theatre pipe organ when he took Justin to the local Pizza ‘n’ Pipes restaurant as a young boy. He was immediately fascinated by the sound and workings of the theatre organ.

Justin went on to learn the organ and now plays many theatre organs. He graduated from Marian University Indianapolis with a Bachelor’s Degree in Piano Performance. His progress with theatre organ was guided by Donna Parker and Martin Ellis and their influence provided a solid base to establish his playing style (which is still evolving) and his refreshing take on registrations and arranging. A lot of the old school theatre organ techniques, so overused these days, are avoided by Justin and his repertoire is loaded with contemporary popular music that seems to transfer well to the theatre organ. However, he still has a fine selection of old favourites up his sleeve to balance his program and keep the cognoscenti happy.

The recent work on the Christie cinema pipe organ allowed Justin to explore refreshing and resourceful registration, both solo and ensemble. His tasteful use of untremmed solo ranks and those shimmering strings was exemplary. He also expertly used Mutations to give vibrancy and colour to narrow scale stops. To do all this, Justin took the opportunity to utilise three full memory levels, each with up to 49 combinations! (We now have 127 memory levels incidentally).

Justin has released a CD recording using the 3/24 Wurlitzer at Hilbert Circle Performing Arts Centre. It is Christmas music recorded during his seven year engagement with the annual Christmas Spectacular, also involving the Indianapolis Symphony Orchestra. Consequently, as a promotional exercise, the parts of the play list we heard took on a ‘Christmas in July’ theme. But this was only a small portion of the program and it all fitted in quite well.

Console up (yes, it is working…) gave us Old Friends by Stephen Sondheim. Justin’s next piece was a popular theatre organ piece Poinciana, arranged by theatre organist Ashley Miller. His next item was one he first heard at the pizza restaurant mentioned previously, With the Wind and the Rain in Your Hair, a 1940s ballad. This was followed by two Rags by Scott Joplin, Pineapple Rag and Bethene Rag. The latter had a sort of waltz beat.

As is often the case with American organists, a religious piece is always included. However, Justin had very skillfully intertwined two unrelated pieces seamlessly to give a very fine result. He opened with Clair de Lune which gradually segued into Jesus Loves Me! Delicate use of strings and chimes added to the spiritual theme.

Justin now launched the Christie into the 1960s. Build Me Up Buttercup was hit from 1968, and we heard part-Hammond sounds and lots of traps, all to a swinging pop beat. Great sound! This was followed by the 1967 Beatle standard, With a Little help From My Friends. Untremmed stops were a feature here.

Time for a CD promotion. Justin chose We Need a Little Christmas from the hit musical ‘Mame’. It certainly got us in the mood for ‘Christmas in July’—even though it was still June! The Chipmunk Song was next (Christmas Don’t Be Late) and ended with Parade of the Wooden Soldiers. Lots of percussion were effectively used in this tune, originally written for piano in 1897.

Coming to the end of the first half, Justin performed a selection from ‘Guys and Dolls’: I’ve Never Been in Love Before; If I Were a Bell; Luck Be a Lady Tonight. Lush new theatre organ registration featured throughout.

Our interval saw everyone partaking in the delicious variety of afternoon tea snacks, as well and tea and coffee. Again we must thank Di Purchase and her team for this. Justin also signed his CDs on sale in the foyer.

Justin Stahl’s second half began with the famous standard Cabaret, jointly arranged by Martin Ellis and Justin. Justin mentioned that he believes the theatre organ is in need of more support at the moment and that we need to encourage new blood (i.e. the younger generation) and embrace more modern music for them to become more involved. He gave the example of the pianoforte. Originally conceived purely as a classical instrument, it has evolved to be an essential tool for blues, jazz and even pop musicians. And so the theatre organ must adapt…

The next four pieces emphasized this point. First we heard Africa by Toto, a 1981 rock hit. Justin gave us an authentic Marimba sound even though the Christie has no such stop.

This was followed by the 1981 rock anthem Don’t Stop Believin’ by Journey and finally Open Arms, also by Journey. This potent ballad was a big hit by Mariah Carey in 1996. It received an amazingly suitable rich sounding theatre organ treatment.

The fourth modern piece was Lullaby by Billy Joel, who wrote this for his daughter. Stahl’s use of haunting string stops was most fitting. Back to another Christmassy song next and an interesting version of We Three Kings but with a Take Five Brubeck counter melody on piano.

Justin then moved to the grand piano for his next item, Sleigh Ride. The Christie, via pre-recorded MIDI, accompanied him as he played the Yamaha grand. This jaunty famous Christmas tune even had a great bluesy middle section. Next was Laura (for wife Lora). Written by David Raskin for the 1944 movie of the same name, it was given a lovely ballad treatment on the Christie.

More recent music followed, with the very Sixties song Happy Together, brought out by The Turtles in 1967. Justin used minimalist registration on this one, with just a few solo stops. The fast moving Latin beat of Besame Mucho came next, complete with castanets and a variety of tuned percussion.

Justin was part of an orchestra when he experienced his first live musical, ‘Chorus Line’, and this introduced him to the wonders of Broadway. His tribute to this show was One—and very nicely presented. A Martin Ellis arrangement of Rainbow Connection from the 1979 Muppet Movie followed, with Justin using a refreshing assortment of stops to give it a warming ballad timbre.

And now to the final musical treat from Justin Stahl. The audience would have wondered what the little paper cups of lollies on their tables were for. And what of the bubble making toys with them? It was all to set the atmosphere for ‘Willy Wonka and the Chocolate Factory’, his final medley of tunes. Justin invited all to enjoy the sweets and blow bubbles while he performed the entire suite of music from this movie-musical fantasy. All the music by Leslie Bricusse and Anthony Newley was there, seamlessly performed on the Christie and using lots of fun percussion and stop effects. Talk about a happy ending!

And so was the audience, with a huge applause forcing Justin back on stage for an encore of Americans We. The rousing march was written in 1929 by Henry Filmore, more famous for his novelty music written for trombone. So ended a wonderful afternoon’s entertainment by the talented young American organist. His invigorating presence at the Christie and the new sounds he conjured out of it was certainly appreciated by his audience. I think we will see more of Justin Stahl!