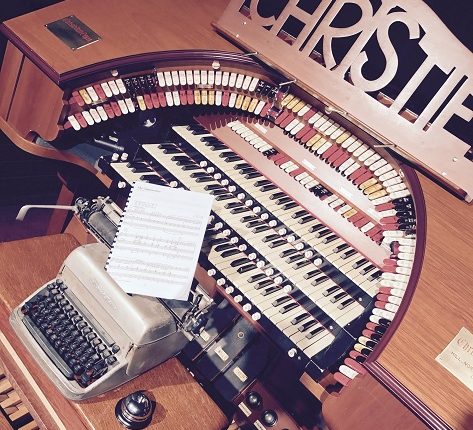 Review: Tony Fenelon ‘At the Office’

IT ALL HAPPENED AT THE OFFICE……

If you missed Tony Fenelon’s concert, At The Office, give yourself a big kick because you missed the concert of all concerts. A better than usual crowd flocked into the Kelvin Grove Theatre when we opened the doors from the foyer, and filled the tables very quickly. The conversations in the foyer had been full of expectation of a greater than usual Tony show, and the buzz in the theatre continued before the lights went down. Suddenly Tony was in the spotlight and his hyped up audience gave him a clamorous welcome as he opened a long awaited spectacular.

What an opening… Irving Berlin would have been proud to hear Tony feature his music to rebirth an already magnificent Christie cinema organ. The Christie delighted us all with its newly adjusted ranks, thanks to the diligent work of an organ builder from Adelaide, Richard Larritt, and a bevy of hard workers from Queensland who have already been named. Crucial to the end result was a Queensland man with a super critical ear for sound, Ian McLean, and Tony was generous in his praise for their preparation of the organ for his concert.

Who can ever forget that performance in a movie by Jerry Lewis of a showstopper called The Typewriter Song. Brett Kavanagh invaded the theatre stage to finish some letters he had to write and Tony directed him to an old typewriter on stage. Between them they presented a version of the song that was an even better showstopper than the original in the movie.

After some more much applauded music from Tony on the Christie, he introduced his game changer for the program. Having recorded the full orchestral accompaniment on the Christie the day before, he went to the grand piano to accompany himself performing the magnificent Greig’s Piano Concerto in A Minor, 1st movement. The audience was simply stunned by this performance. The cheering and applause told us that we love classical music too. Interval in the foyer followed and was all excitement and praise for Tony and the Christie.

The second half was another cavalcade of movie greats, all performed with Tony Fenelon’s love for music, and his unstoppable enjoyment in having fun. Can you imagine the electrical activity going on in his brain as he takes the instrument to greater heights with mixtures of sounds that we marvel at? There surely is not a computer in existence that can match the RAM capacity that Tony Fenelon has access to in his brain!

The final ace Tony had up his sleeve for the day was his performance on the Christie and the grand piano of Richard Addinsell’s magnificent Warsaw Concerto. This work had been written for a famous movie called “Dangerous Moonlight”. The movie was about the tragedy of war, and the inevitable triumph of good over evil, and Tony’s mastery of the orchestral accompaniment on the Christie to his piano performance was worthy of the excited standing ovation from his admiring audience.

I have not ever before seen a TOSA Qld audience leap to their feet so quickly, and enthusiastically applaud an artist as they did Tony Fenelon.